After Aji no Sanpei conquered the ramen universe with it's glorious creation of Miso ramen, many restaurants followed suit. But it wasn't untill the early 1960s that a store ambiguously named 純連 burst onto the scene, and changed everything.

I write the name in Japanese alone because, well, when the first 純連 came out, no one actually knew how to read it besides the owner, an old woman who merely wanted to start selling ramen. The people in the shop called their store "Sumire", but most Sapporo dwellers misread those fancy Chinese characters as "Junren".

So begins the advancement of Miso ramen.

In the murky, 1960s kitchen of the old Sumire, it is suggested that the first "rich" miso ramen was born, and this is considered the "Second Generation" of Sapporo ramen. As we recall, Aji no Sanpei made miso ramen with the concept that it would be healthy and filling. Sumire entered the market with the prospect of changing things up. The pork was bountiful, the soup thick and complex, dark deep flavor, and a characteristic film of lard floated over the noodles, keeping them hot and adding to the already copious amount of richness.

No longer was Miso Ramen a post war image of necessity in hard times, but rather, it had become an image of excessive pleasure. This pleasure was not cheap of course, something of the equivalent of 900 to 1000 yen for a single bowl.

But the new style of Miso ramen was loved by people in Sapporo, they had been picked up by a magazine and customers were flourishing. However, the old shopkeeper one day became extremely ill, and decided to close shop.

That is, until the following year, in which her eldest son decided to continue the business. They reopened, this time under the name "Junren", due to customers frequently calling the old restaurant that, and to this day have been a staple in the Sapporo Ramen culture.

However, the old shopkeeper actually had three sons, and the other two also decided to open up a shop, reopening "Sumire". In other words, at one point in time there were two shops named 純連, one read as Junren, one as Sumire. Despite this, they were completely separate in terms of management; they merely had similar characteristics in the food.

Sumire has since changed the way their name looks to すみれ, to distinguish it from Junren. But the truth is that the original Sumire created a new style of ramen known as "Sumire Style", or as it's also called now "Jun Sumi Style". To give you an idea on how popular "Jun Sumi Style" is, the following website lists 17 restaurants, all popular no less, as having Jun Sumi Style Miso Ramen.

It's more or less the new standard for miso ramen.

Since their massive boom, both restaurants have grown into fairly large size multi shop companies; Junren has four locations, and Sumire has well over 10.

You can imagine in this way then, that the two essentially go hand in hand. You can't have one without the other, since they're from the same source.

I will review the two restaurants as this blog goes. 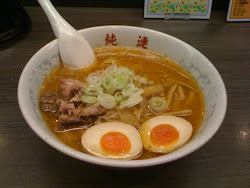 Welcome to the Guide!

This is a comprehensive English review of Ramen in the city of Sapporo. Newcomers, please click here for a bit of background on this blog. Otherwise, enjoy the reviews and information, which is organized by section below. If you have any questions or comments, please feel free to contact me.

Mike
I live and breathe ramen. Exploring the possibilities and techniques of this wonderful food is my passion. Currently, I develop methods to make the dish at home.